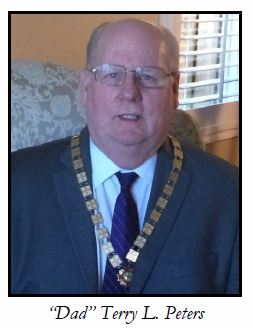 Brother Peters was initiated into San Jose Chapter in 1967. He became an advisor when his son, Scott, joined Pleasanton Chapter. Terry has been an active part of Northern California DeMolay having served as a Chapter Advisor, Division Advisor, Convention Director, and Jurisdiction Advisor. He has been the Assistant Executive Officer for the past fourteen years. As an Active Member of the Inter-national Supreme Council, Brother Peters chaired the Convention Planning Committee for four years. He is also a Master Mason with Pleasanton Lodge No. 321.

“Dad” Peters retired after a thirty year career with AT&T. He is married to Evonne and has two adult children, Scott and Andrea, and three grandsons.