An Advisor who wears the Cross of Honor has received a distinctive honor that can only be given by DeMolay International to a member of an Advisory Council or a personal representative of an Executive Officer. It denotes three or more years of conspicuous meritorious service to a Chapter or jurisdiction, and exceptionally outstanding efforts on behalf of DeMolay. 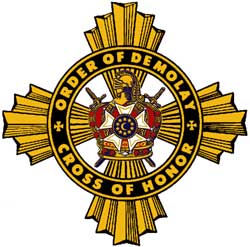