In 1919, while employed as the social services director for the Scottish Rite bodies in Kansas City, Missouri, Frank Sherman Land hired a teenager by the name of Louis Gordon Lower to perform odd jobs around the building. As the two became friends, Land found out that Lower’s father had died a short time before and that the young man missed having the guidance that a father would provide. Lower had other friends whose fathers were not in the home, whether from divorce, abandonment, or death, and that these young men would also like to have an adult male they could go to for guidance.

Land suggested Lower invite some of his friends to the Scottish Rite building to discuss starting a club. Within a few days Lower brought eight of his friends to a meeting. The nine young men agreed that the idea of a club was a good one. Soon the “Order of DeMolay” was born. Within three years, chapters had been established in 39 of the then 48 states and the District of Columbia. It is now worldwide.

Where did the name DeMolay come from? 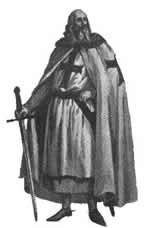 The name came from Jacques DeMolay, the last Grand Master of the Knights Templars. The original nine members of DeMolay selected his name in honor of his high principles.  The namesake of the Order of DeMolay was born in Vitrey, Department of Haute Saone, France in the year 1244. At the age of 21, DeMolay joined the Order of Knights Templar.

The Knights Templar was an organization sanctioned by the Roman Catholic Church in 1128 to guard the road between Jerusalem and Acre, an important port city on the Mediterranean Sea. The Order of Knights Templar participated in the Crusades and earned a name for valor and heroism.

With many nobles and princes sending their sons to join the Knights Templar, the Order also became very wealthy and popular throughout Europe.

In 1298, Jacques DeMolay was named Grand Master of the Knights Templar, a position of power and prestige. As Grand Master however, Jacques DeMolay was also in a difficult position. The Crusades were not achieving their goals. The non-Christian Saracens defeated the Crusaders in battle and captured many vital cities and posts. The Knights Templar and the Hospitalers (another Order of Knights) were the only groups remaining to confront the Saracens.

The Knights Templar decided to reorganize and regain their strength. They traveled to the island of Cyprus, waiting for the general public to rise up in support of another Crusade.

Instead of public support, however, the Knights attracted the attention of powerful lords, who were interested in obtaining their wealth and power. In 1305, Philip the Fair, King of France, set about to obtain control of the Knights Templars. They had been accountable only to the Church. To prevent a rise in the power of the Church, and to increase his own wealth, Philip set out to take over the Knights.

The year 1307 saw the beginning of the persecution of the Knights. Jacques DeMolay, along with hundreds of others, were seized and thrown into dungeons. For seven years, DeMolay and the Knights suffered torture and inhuman conditions. While the Knights did not end, Philip managed to force Pope Clement to condemn the Templars. Their wealth and property were confiscated and given to Philip’s supporters.

During years of torture, Jacques DeMolay continued to be loyal to his friends and Knights. He refused to disclose the location of the funds of the Order and he refused to betray his comrades. On March 18, 1314, DeMolay was tried by a special court. As evidence, the court depended on a forged confession, allegedly signed by DeMolay.

King Philip ordered them both to be burned at the stake that day, and thus the story of Jacques DeMolay became a testimonial to loyalty and friendship.